How do people’s opinions on related topics evolve over time? Why do groups of like-minded people tend to agree on different issues? These and other questions concerning the interdependence of political statements are at the center of a recent preprint by Sven Banisch and Eckehard Olbrich. Their research will be presented during the 2018 Conference on Complex Systems in Thessaloniki, in the Cognition and Linguistic session.

Our increasingly interconnected world where information is constantly exchanged poses significant challenges to the social sciences. Of crucial importance is the detection and observation of how political opinions evolve so as to gain an empirical understanding of societal issues and processes. Within this research direction, the mathematical modelling of opinion dynamics in political spaces is particularly active. Up to now, mathematical models have mostly focused on single issues, neglecting any interdependency between different issues and topics. However, we know that policymakers and electors tend to discuss different political questions at the same time and the topics are not completely independent.

In the recent preprint An Argument Communication Model of Polarization and Ideological Alignment, Sven Banisch and Eckehard Olbrich have developed a novel mathematical model of opinion formation. This research is the first to addresses inter-issue dependencies in an explicit way and as such has the potential of shedding light on the impact of cultural differences on argument exchange processes.

The model is based on very natural assumptions: the actors are living in a political space where they have the opportunity to exchange their beliefs on different issues. Different sets of facts and arguments are associated with different issues and used to support or refute an argument. Furthermore, the authors assume that actors tend to interact more with like-minded people, which leads to the reinforcement of group opinions.

Technically speaking, the model takes into account a collection of issues and an ensemble of arguments, which can be either in favor of or against a certain issue. To describe this collection in mathematically sound terms, the researchers make the use of a bipartite graph which encodes issues and arguments, while the argument exchange mechanism is implemented using a linear algebraic model. The tendency of actors to interact more with like-minded people is assumed and realized by prescribing a bound on the distance of opinions. This allows establishing whether an actual discussion between the authors will happen or not, based on how distance the two actors’ opinions concerning a certain issue are. The mathematical approach is put to test on toy-models based on a series of pro- and con-arguments.

With the aid of computer simulations, the authors have studied how the evolution of opinions over time is influenced by initial conditions, by interdependence between issues, and by the actors’ willingness to discuss with people with different views.

While still preliminary and rather simplified, the model developed in the article offers some mathematically sound interpretation of observed polarization phenomena and is a first step towards a rigorous mathematical description of more intricate argument exchange process. 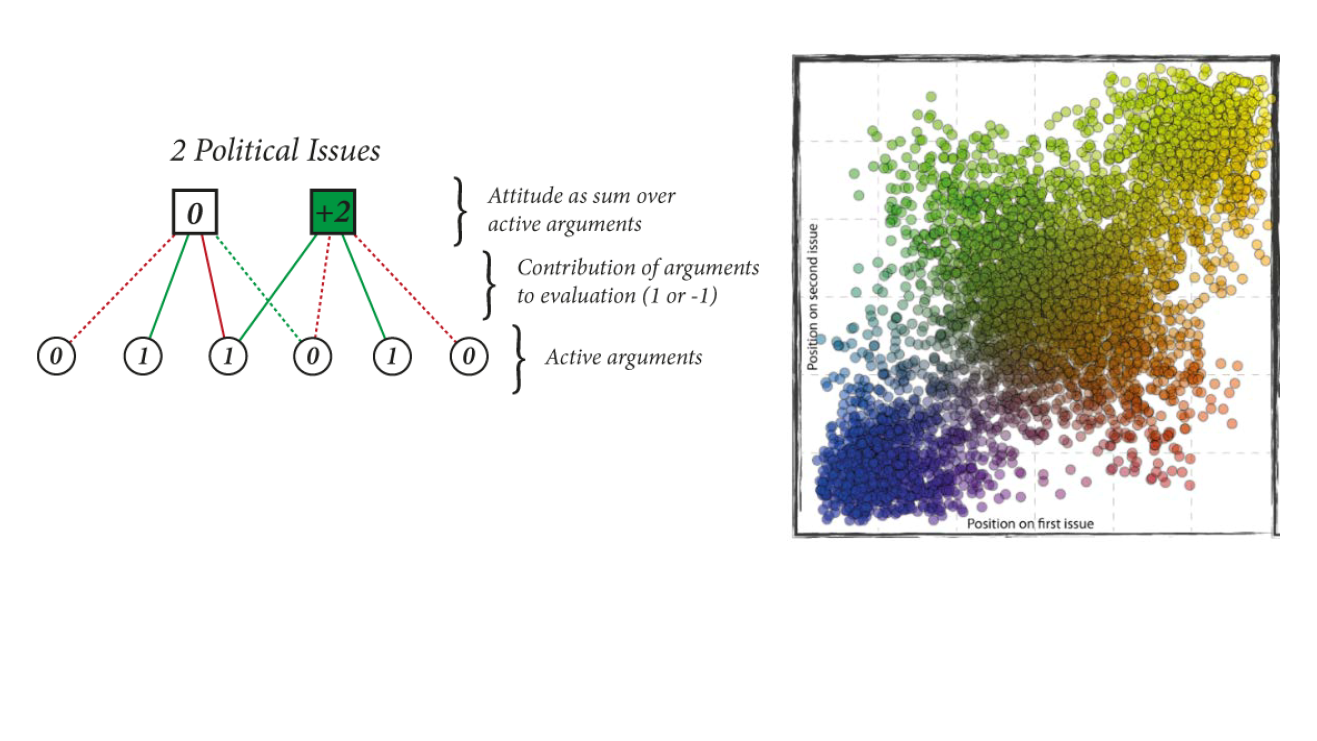