A brief introduction into the main concepts and tools.

Social media and the digitization of news and discussion fora are having far-reaching effects on the way individuals and communities communicate, organize, and express themselves. Can the information circulating on these platforms be tapped to better understand and analyse the enormous problems facing our contemporary society? Could this help us to better monitor the growing number of social crises due to cultural differences and diverging world-views? Would this facilitate early detection and perhaps even ways to resolve conflicts before they lead to violence? The ODYCCEUS project answers all these questions affirmatively. It will develop the conceptual foundations, methodologies, and tools to translate this bold vision into reality and demonstrate its power in a large number of cases.

ODYCCEUS stands for Opinion Dynamics and Cultural Conflict in European Spaces. The project seeks conceptual breakthroughs in Global Systems Science, including a fine-grained representation of cultural conflicts based on conceptual spaces and sophisticated text analysis, extensions of game theory to handle games with both divergent interests and divergent mindsets, and new models of alignment and polarization dynamics. The project will also develop an open modular platform, called PENELOPE, that integrates tools for the complete pipeline, from data scraped from social media and digital sources, to visualization of the analyses and models developed by the project.

The fundamental assumption of this project is that conflict is not just the effect of diverging interests — it results also from the way different cultures and world views filter and shape how individuals and communities represent themselves and other social groups, their mutual interactions, their opportunities for acting, and the motivations and intentions underlying specific actions and events. The high dimensionality and dense interactivity of contemporary social systems makes it hard, if not impossible, to fully capture their structure. The accelerated dynamics of social interaction makes it difficult to learn from past experience, as actors cannot rely on the stationarity of social processes. Partial representations and different world views are unavoidable. Conflict results from or is amplified by cultural and cognitive differences. We need theories of conflict that comprehend meaning and representations and not just interests.

The theoretical part will develop the conceptual foundations for the project to provide common ground for joint research. It will deliver novel modelling approaches and develop the corresponding mathematical framework for coming to grips with high dimensional and densely interactive socio-cultural systems at different scales (individual, groups, populations). They include projective game theory, conceptual spaces, network analysis based on dynamic graphs, and a contextualization through broader socio-technical perspectives highlighting the complexity and uncertainty of social change. We will also develop concepts for the analysis of competing world-views provided by international mass and social media, crossing the perspectives of quantitative geography and media studies, and analyze how the systemic logic of social media and the underlying technology — including the one produced by the project — will affect the arenas in which conflict and opinion dynamics play out.

Social interaction is extremely complex and involves multiple dimensions, but individuals necessarily focus on fewer dimensions and rely on partial representations. Such projections are not arbitrary — they are in many cases acquired by being part of a social context that shapes widely shared, durable, world-views. Individuals belonging to different cultures usually conceive an interactive situation through the filter of categories, selective perceptions, and mental models that may lead them to divergent interpretations of the same situation. The project will capture these phenomena at different levels of aggregation and look from different perspectives. In terms of units of analysis, these levels correspond to a microlevel (involving agents and direct interaction such as captured by simple games), a meso-level that captures groups and communities (and spatial regions), and a macro-level corresponding to populations and large scale entities such as states or macro-regions. We look at representations and dynamic mechanisms of change at such levels.

In the modeling part of the project, we develop models relative to the dynamics at the levels of conceptual representations, positions actors adopt in these spaces, and the communication groups they belong to. This includes opinion dynamics and multi-agent learning on heterogeneous and adaptive conceptual spaces as well as models that focus on the conditions and feedback mechanisms under which distinct spheres of communication emerge and foster polarization. Using innovative field and lab experiments we will gain empirical understanding of the inter-personal mechanisms of conceptual negotiation and opinion exchange. Integrating the outcomes of text analytic methods applied to different use cases, we aim at empirically informed models that are micro-founded by experimental knowledge and validated against observed collective discourse processes.

The emergence of online communities and of a large amount of online data offers an opportunity to study and predict such dynamics on an unprecedented scale. Most of these data are of a textual nature: this opens the way to a large exploration of how meaning and representations are shaping (and are in turn shaped by) the dynamics of conflict. This requires substantial developments in the field of text analysis and natural language processing to capture the emergence of cultural and conceptual divides from large textual data sources. Also, we still have a limited knowledge of how discourse in public media and arenas interacts with actual “offline” conflict (for example in the arena of physical and geographical space). This requires a careful analysis of how discourse and action interact, and to extend the analysis over time horizons which stretch well beyond actuality.

An important part of ODYCCEUS will thus be the development of natural language processing tools that allow a reconstruction of politically relevant conceptual spaces from data. On the one hand, these will be statistical models with shallow language processing to deal with large corpora of data. On the other hand, the project will adopt precision language processing, recently developed in computational linguistics, in order to have much more fine-grained and accurate ways to map language to conceptual spaces, as well as to map out the discourse structure, argumentation structure and unfolding of a debate. The project will also develop methods for the multidimensional and multilevel analysis of interactions (from logical networks of competing arguments to complex information flows in and across different social spheres). These methods will allow the analysis of community structures in social media as well as a multiscale mapping of the disparities in the diffusion of international news on conflict in mass media. 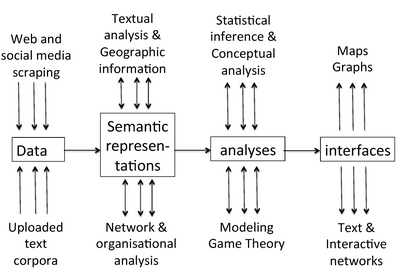 The project will develop an open modular platform called PENELOPE that integrates the different methods and tools from the project. The platform features an infrastructure allowing developers to provide new plug-ins for additional steps in the pipeline, share them with others, and jointly develop the platform as an open source community. It targets four types of users: (i) social scientists who want to empirically ground their research, (ii) media researchers, (iii) the public at large, who wants to follow the news, and particularly public debates, through a variety of media, including social media, and (iv) developers who want to contribute with new tools. The PENELOPE platform is a cloud-based open modular platform that is accessible to end-users using mobile and web-based interfaces. Components, including components developed by third parties, can be plugged in through APIs and an open source infrastructure.

On top of the PENELOPE platform, the project will build two innovative participatory tools, the OPINION OBSERVATORY and the OPINION FACILITATOR, which allow citizens to monitor, visualize and influence the dynamics of conflict situations that involve heterogeneous cultural biases and non-transparent entanglements of multilateral interests. The OPINION OBSERVATORY takes a global view of ongoing debates: The semantic networks, individual conceptual spaces, and argumentation structures obtained with the empirical methods will be compared to each other using geometric operations over conceptual spaces, structural mapping, and machine learning, in order to generate a conceptual landscape (combination of individual conceptual spaces) that brings out both the similarities and dissonances between the opinions, conceptualizations and argumentation structures of individuals engaged in commenting and debating on the same domain. Once the OBSERVATORY is operational, it becomes possible to set a further step in building an OPINION FACILITATOR. The FACILITATOR makes the opinion differences, and particularly the conceptual maps used by participants in a debate visible in such a way that points of contention can be identified and attempts can be made to find common ground on these points. For example, a particular word used for a basic concept in the discussion might be ambiguous. This ambiguity can be illustrated by different uses of this concept and then lead to the negotiation towards more precise terms so that miscommunication due to this semantic ambiguity does not occur.

The OPINION OBSERVATORY and FACILITATOR are intended for a very wide public. They will be released as apps that use the PENELOPE infrastructure to perform the data gathering, analysis and modelling that is needed to make the conceptual maps and debate networks driving observation and facilitation. The project will construct prototypes and test them with real life audiences.